The futuristic chassis of the ASUS ROG Huracan G21 measures 129.9×372.4×366.1 mm, which is clearly smaller than a traditional tower desktop. ASUS engineers have managed to pack the machine with everything that its bigger brothers have to offer, including Intel’s eight-core Core i9-9900K CPU, NVIDIA’s GeForce RTX 2080, up to 32 GB of RAM, an M.2-2280 PCIe 3.0 x4 SSD, two 2.5-inch SSDs/HDDs, one 3.5-inch HDD, and even a DVD drive (possibly, to install older games). See general specifications in the table below.

As mentioned above, the chassis allow owners of the ROG Huracan G21 to upgrade the system hassle free. Furthermore, ASUS equipped its ‘baby’ gaming PC with a very well-thought cooling system with multiple inlets, so no component is going to overheat. In fact, the ROG Huracan has a special magnetically attached foldable panel on its side that can be easily opened to further improve thermal and actual performance. Speaking of performance, it is necessary to note that the PC comes with the ASUS ROG Aegis III application that enables easier performance tuning and monitoring of components. 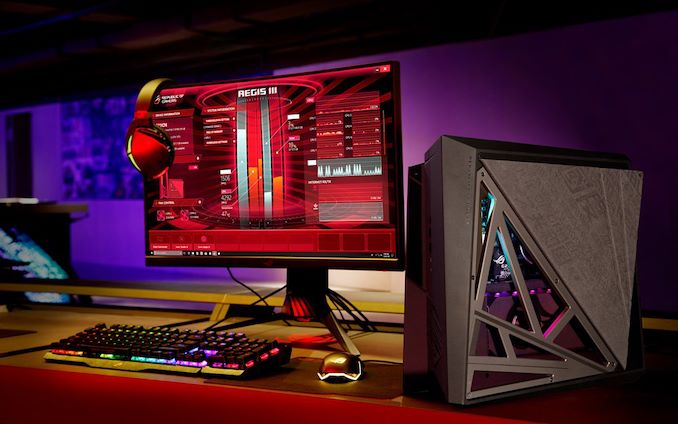 To make the ROG Huracan system look as good as it performs and enable owners to customize its looks, it also has multiple RGB LEDs that can be controlled using ASUS’ Aura Sync software.

So far, ASUS only lists the 2020 ROG Huracan G21CX computers on its website, so expect the machine to show up shortly. Availability will vary from region to region, but it is reasonable to expect ASUS to launch the systems across the world more or less at the same time.